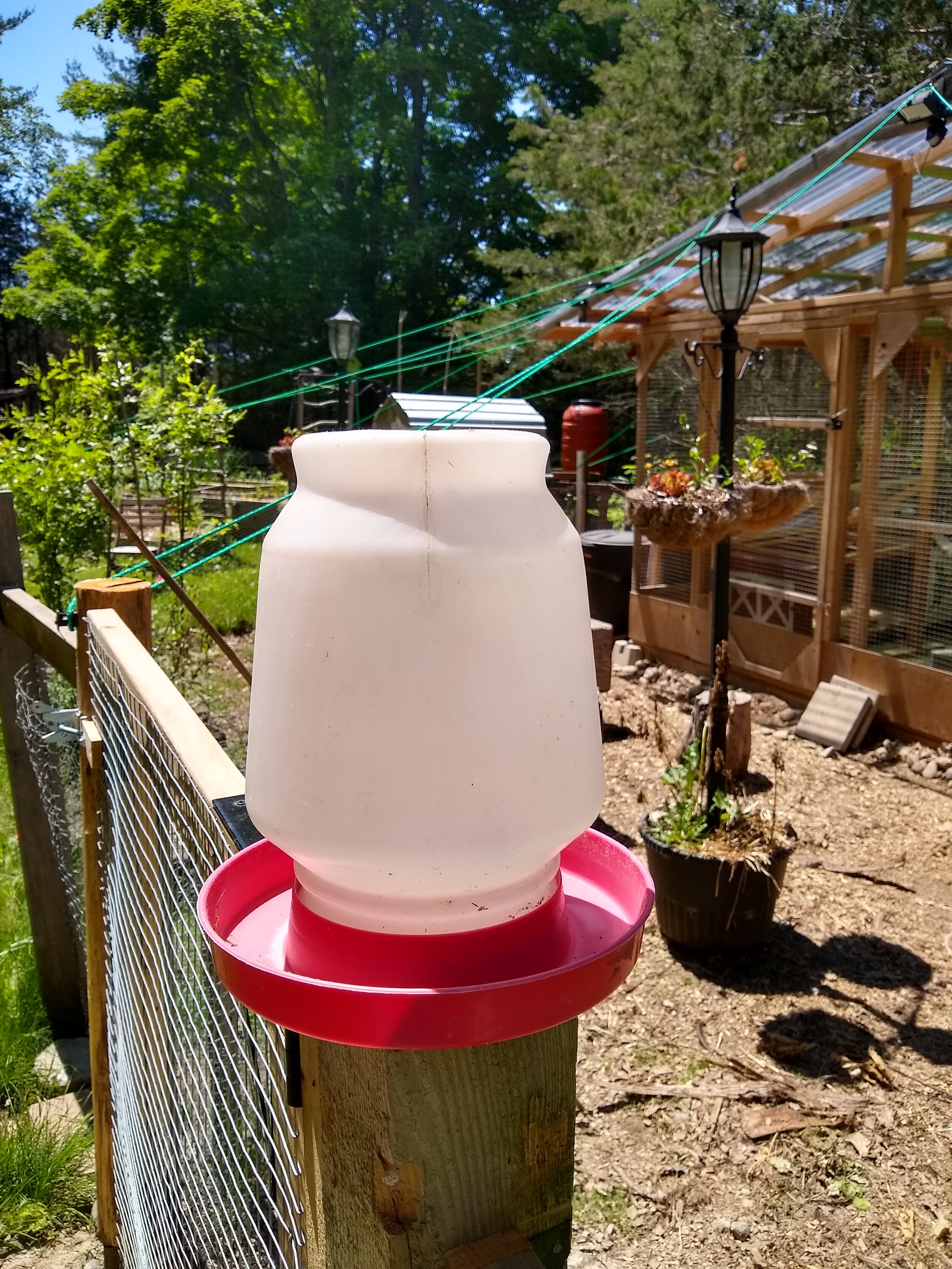 Chickens: “Thanks Bipedal Female Food-And-Water Dispenser, but do you have anything with more dirt in it? ktks”

Chickens make terrible farmers. They literally live like there’s no tomorrow. See a sprout, eat a sprout. Tomorrow be damned! Live for the now!

But we’ve managed to turn our chickens into gardening allies, in spite of themselves. We change over our chicken waterers every day or so. Though a chicken’s favourite water is always the grossest, dirtiest, mudpuddliest, most-recently-pooped-in water they can find, we like to feel we’re at least giving them the option of drinking fresh clean water. From there, they can do whatever their little dino hearts desire.

But chickens don’t drink a full waterer every day, so that means we are frequently removing a 2/3rds full waterer from their run. Rather than dumping it down the drain, we either consolidate it into the previously mentioned “ugly flushing buckets”, or use it to feed the gardens. I like to grow a few plants in the chicken run which are safe for them to nibble — assorted herbs, and some leafy greens like kale. I also grow roses in there, which are able to defend themselves against the chickens. Roses provide a nice bit of greenery in the run that can hold up a chicken’s reign of pecking terror. And since they’re out of chicken reach/interest, I’m able to harvest the petals and rosehips. All those plants get watered with the chicken waterers. I will turn you into gardeners yet, you tiny defoliating monsters.

We often joke that we only build structures so we can put rainwater-collecting roofs on them. It’s not “true” but it’s also not-not true. Both our chicken run and our front firewood storage have roofs on them, with the roof water diverted into rainwater barrels. We use this water for outside chores. As-is, it’s not potable (though we have plans…), but it is great for a quick wash of muddy feet, cleaning out the compost bucket before bringing it back inside, or watering the vegetable gardens.

It’s easy enough to pop a gutter on a roof. Instead of ending up with a hard dripline around your structure that messes up the ground around it, all that water become useable, and eventually seeps back to the earth in a more gentle dispersed way. 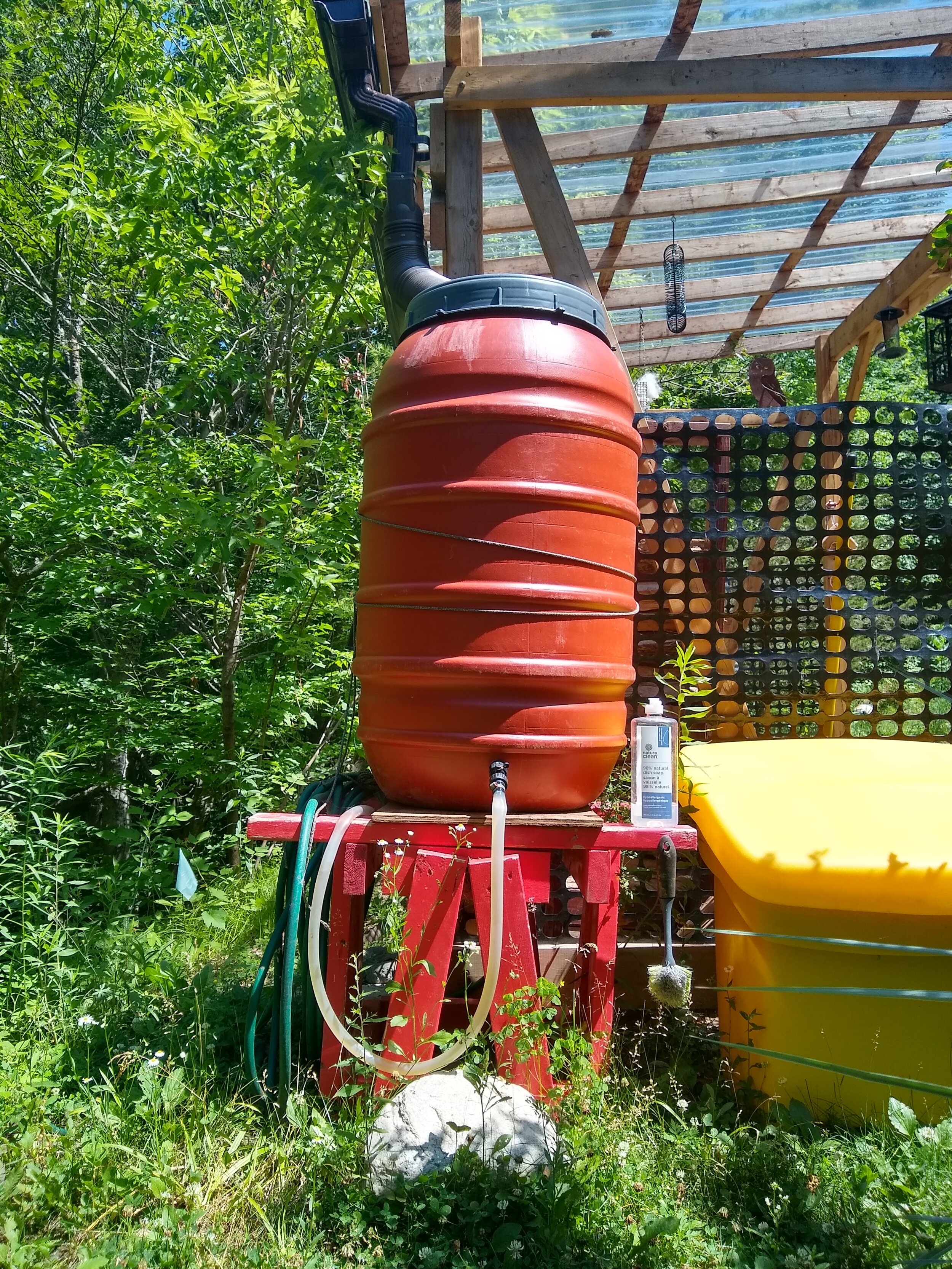 Just out of frame — the little dish we fill with rainwater on hot days for the birds, chipmunks and other woodland critters.

Instead of planting plants and then figuring out where their water will come from, “planting the rain” means to find the water first, and let the plant follow. If you have even the tiniest interest in rainwater, this video of Brad Lancaster in Tuscon, Arizona is a must watch.

Brad’s approach of “planting the rain” transformed the barren streetscape where he lives into a life-giving food-generating oasis, by rethinking what’s possible, and working with his neighbours. Read more and find resources at his website: Harvesting Rainwater.

““One of my primary mentors was an African water farmer, Mr Zephaniah Phiri Maseko. When I spent just one day with him, seeing how he converted a wasteland into an oasis just by planting the rain.

I said “Look, the water situation is so bad in my community I want to leave, where should I go?” And he slapped me on the shoulder and he said “You can’t go. If you run away from your problems, you’ll just plant problems everywhere you go.

You gotta go home, set your roots deeper than you ever thought possible and figure out solutions.” ”