With the cooler temperatures and some rain lately, I thought there might be some mushrooms fruiting in the woods, so I went to take a look.

I sent this photo to my friend Miles (okay I sent it to a whole lot of people immediately) who asked if this is normal for our woods, such magical appearances.

No sir, it is not. Magic yes. The woods are full of wonder, always. But this is the first time I have seen such a fruiting of mushrooms! Most of the fungi I find are one or two offs. If they are gregarious or abundant like this, they are usually not one of the edible species. I have spotted oyster mushrooms here before once or twice, but never in such abundance. Never like this. 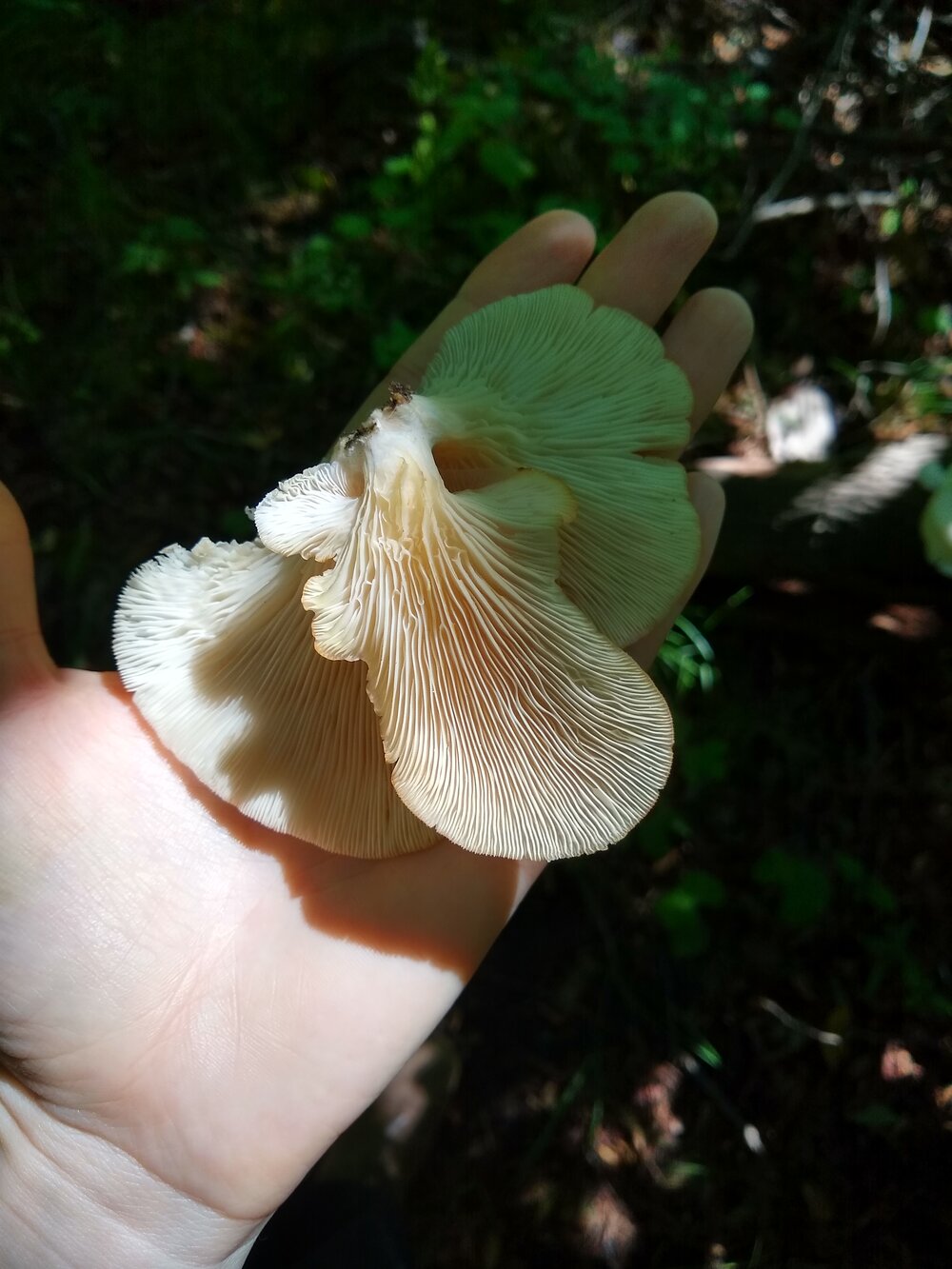 Here are a few of the field ID characteristics that led me to ID this as an oyster mushroom (Pleurotus ostreatus). Oyster mushrooms are saprotrophic — they’re decomposers, fruiting on dead or decaying matter. It’s a little hard to tell from the photos here, but the tree these are fruiting on is a broken hickory. The tree snapped in half in a storm ages ago, and the top of the tree now hangs inverted from the trunk. It hasn’t quite broken free and fallen to the ground, but instead hangs on tenaciously by a few twisted strands of trunk. We often check after windstorms to see if it’s finally let go and dropped to the forest floor, but nope. Still hanging there. I guess the fungi respect that tenacity, and thought such a stalwart spirit would make a good home.

The cap and gills of these mushrooms are light in colour, the cap is moist, smooth, offset from the stem, and the fruits are attached in clusters by stumpy stalks (where there are any stalks to speak of). Very importantly for oyster mushrooms too is the gill attachment — instead of ending at the stalk, they are “decurrent”, which means they continue right on down the stem, not ending at the cap.

It’s well known amongst my pals that I am a real boring stick-in-the-mud about mushrooms. I loooove mushrooms, but I don’t nibble, I don’t dabble… I have a very short list of fungi I am confident enough that I can ID correctly (and which don’t have toxic lookalikes) that I am willing to forage and eat them.

It’s about respect not confidence. In mushrooming you go quickly from ‘knowing nothing’ to ‘thinking you know quite a bit’ to ‘realizing you definitely know almost nothing’. Fungi are endlessly fascinating and wonderful and complex. I went to a mushroom course where we spent a week harvesting and IDing fungi, and witnessed many very experienced mushroomers — including our two instructors — struggle to identify some of the mushrooms we found down to species. Respect the ‘shroom. 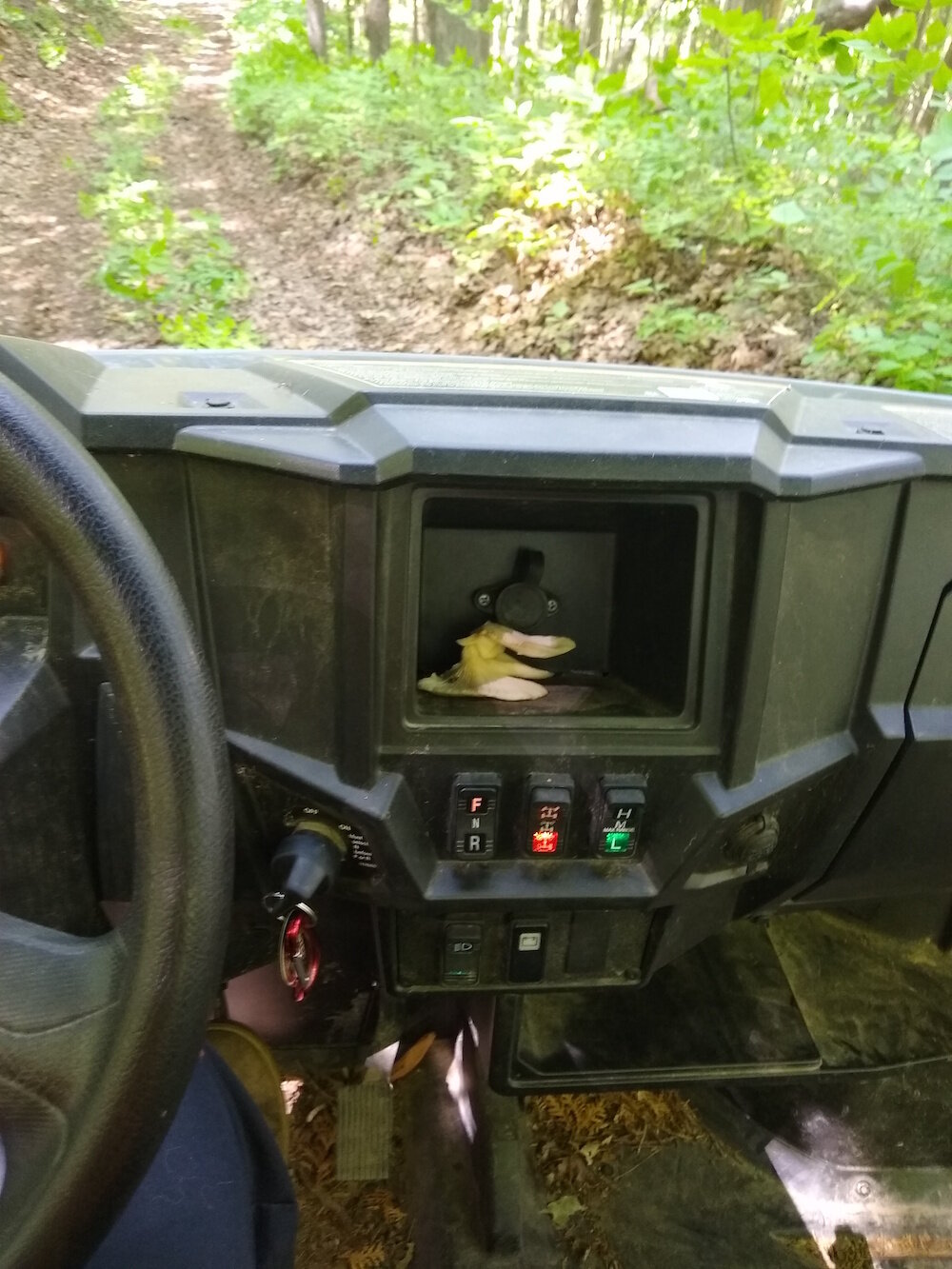 We’re going for a ride in the (electric) car little buddy. 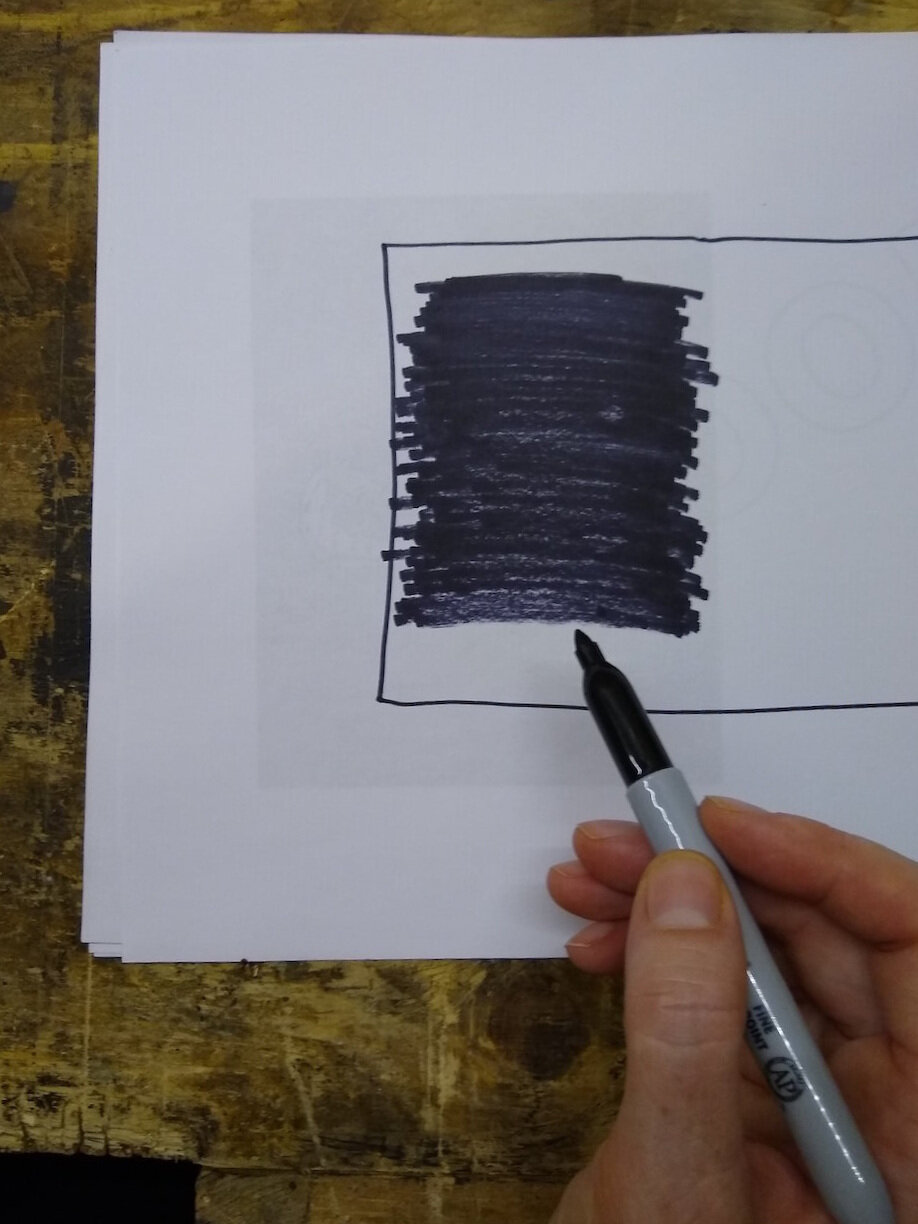 I’ll explain in a sec…

So in addition to a field ID, I brought a sample mushroom back to my “lab” (aka the workbench, with constructions projects hastily shoved to one side). Spore prints are incredibly useful to identify mushrooms. If this is an oyster mushroom, the spores it releases should be very pale — somewhere in a white-violet range.

To take a spore print, you remove the cap of the mushroom and place it overtop of a piece of paper, so the spores will fall from the gills/pores onto the paper where you can look at them. It works best if the cap is fresh and not too young, not too old. It can also jumpstart things to sprinkle a little water on the cap, before covering it with a container (I usually use a plastic yogurt container turned upside down).

The colour of mushroom spores can range from extremely dark, to extremely light. So you need to place any cap you’re checking on a material where either extreme will show up. You can of course buy “special” pieces of paper to rest your mushroom on that are half black/half white. Or you can get black and white cardstock and lie them beside each other (to reuse them, rest your cap on a piece of glass or plexiglass you place over the papers). Or, for a quick’n’dirty hack, you can do what I do when I’m in a rush, and just colour a section of white scrap paper with a black sharpie. 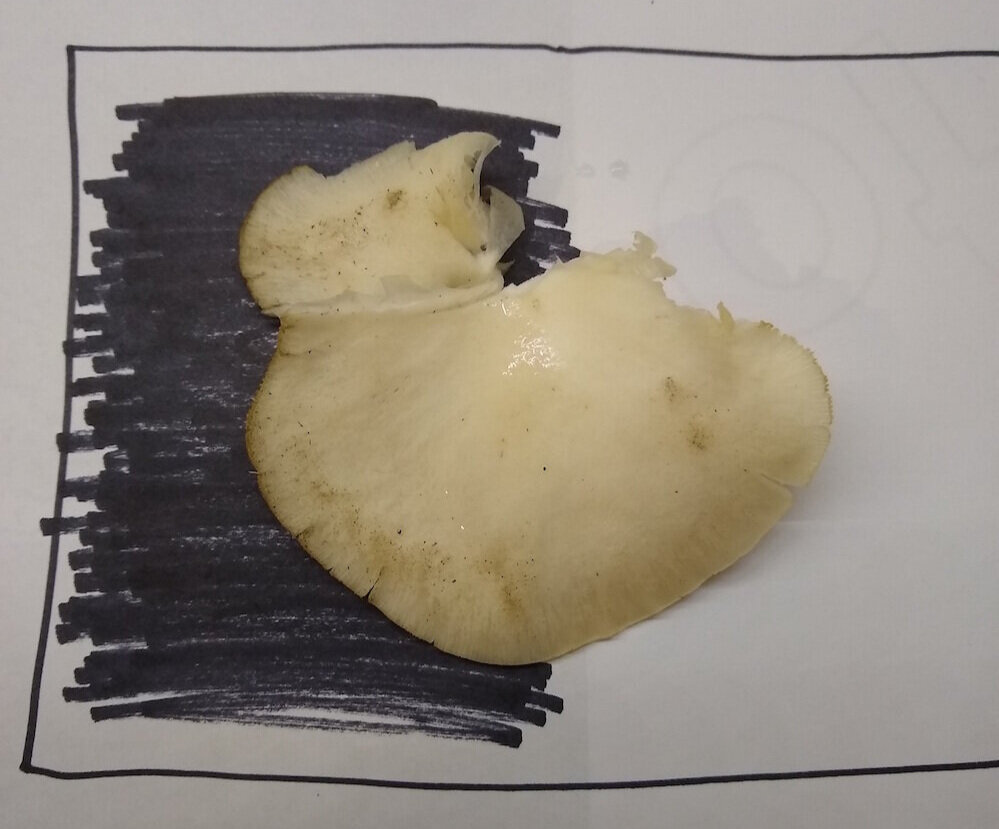 Now we play the waiting game. Patiently, cuz peeking might screw up the print. Go read your mushroom book for a bit.
A full print can take anywhere from an hour or two to a day. But if the cap is fresh, you may start to see some spores release sooner. I set a timer for half an hour and go do something else before I check at all. Mostly so I don’t sit at the workbench staring at an upside-down yogurt container, waiting for time to pass. Which has definitely actually happened.
After about an hour, the spores of this sample had begun to release… and they were definitely light!
Time to fetch the basket! And the Neil. 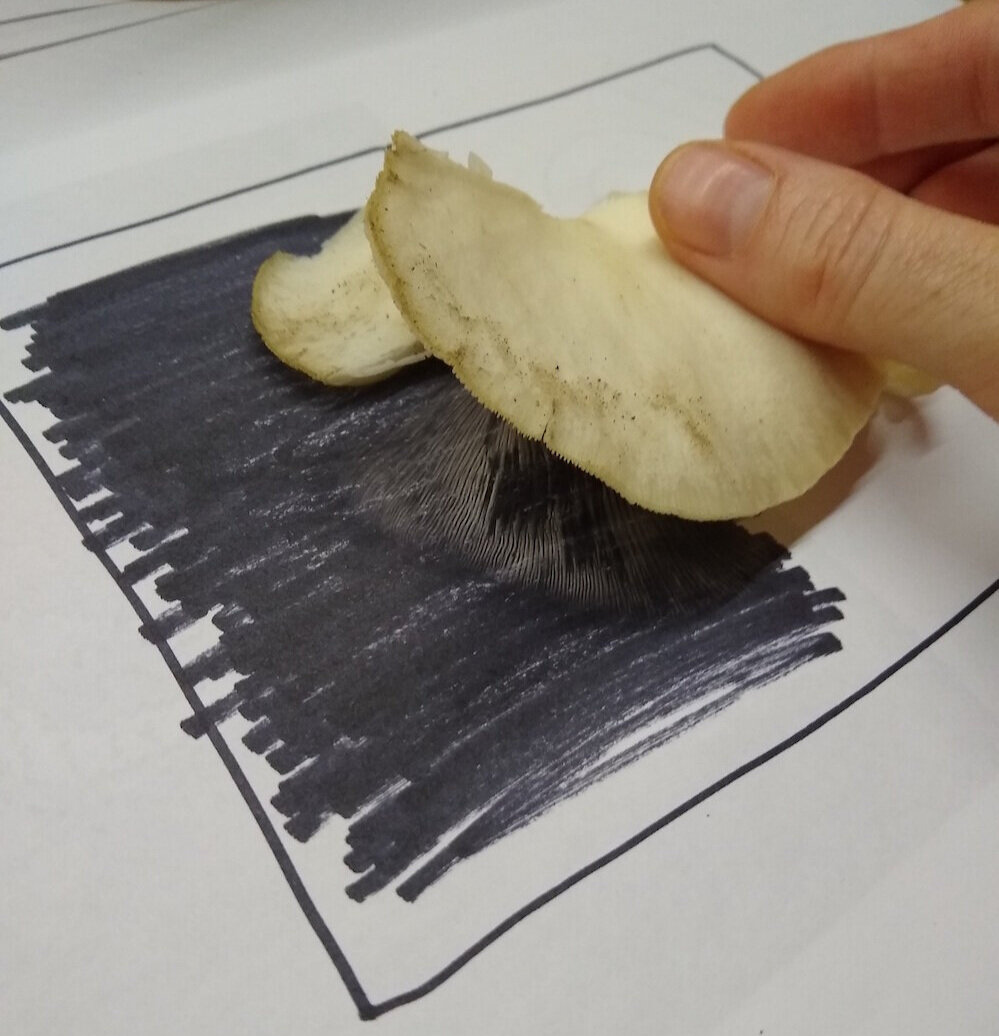 No peeking. Okay a little peeking… 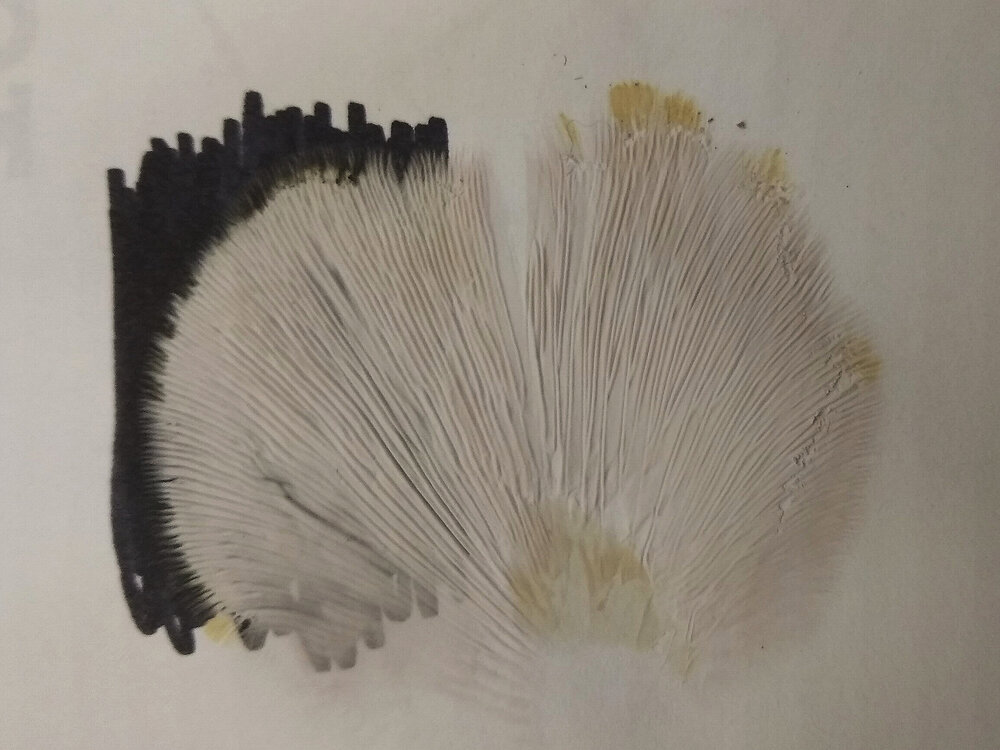 Bingo!! What a beauty. This is not a slice of the cap, it is just layers of the spores, fallen from the gills.

I’m fine. This is fine. The mushrooms will still be there. I love Neil I love Neil I love Neil…
Neil had been up for ages but hadn’t eaten, so he wanted to grab a quick bite before we went to fetch the fungi. He told me I could go ahead without him, he’d be about a half hour. Half an hour?! But something-something-shared-experiences-love-of-my-life-whatever. I could sit and stare at him eating his burger the way I stare at a mushroom cap I’m waiting to drop its spores. But instead I had a shower. Washed some dishes. Answered some emails. It nearly killed me, but I hung back so he could join me for the harvest too. Once I was done some chores, I waited in the UTV with my collection basket, which surprisingly did not help with my ability to be patient. 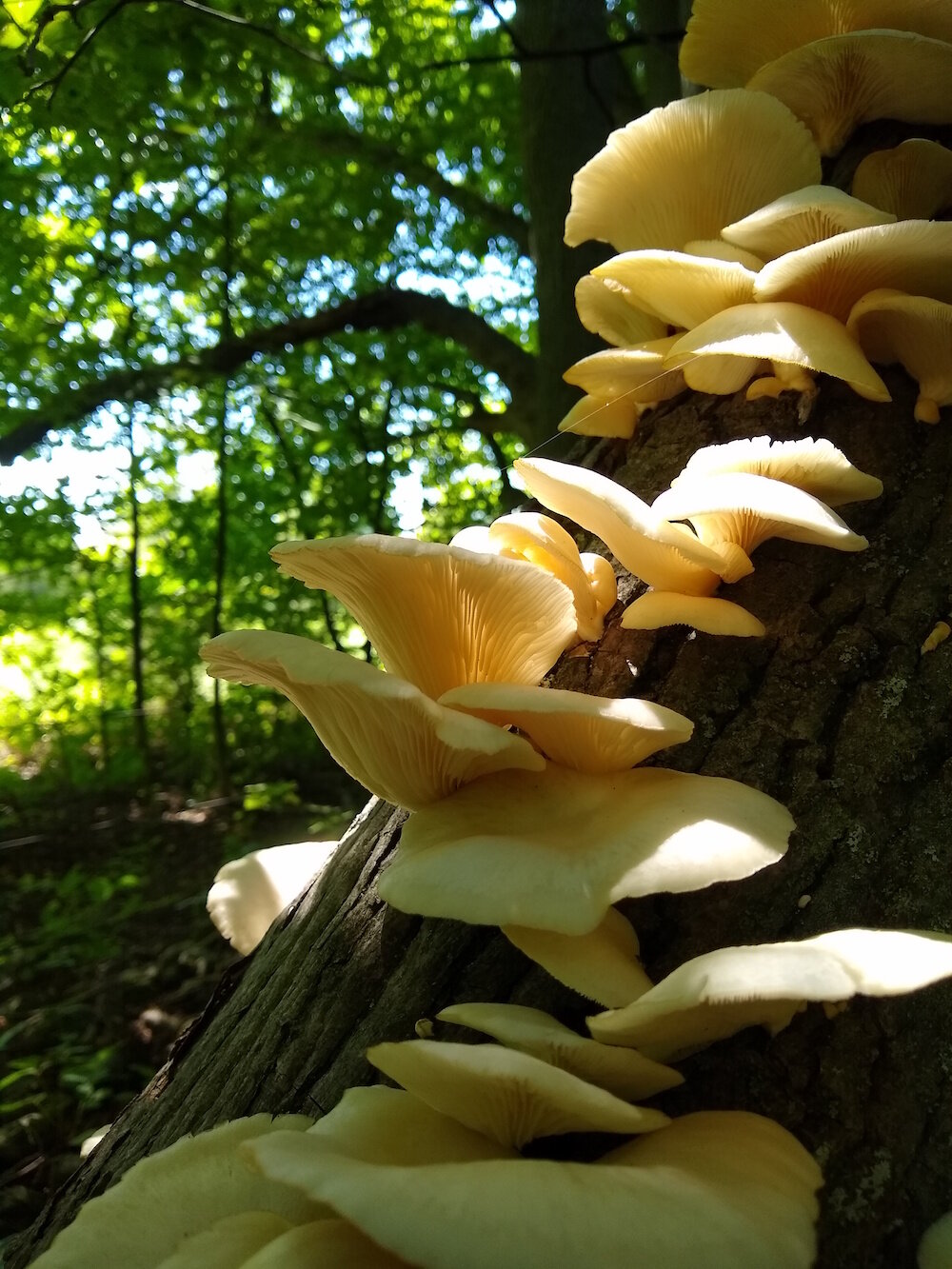 They were still there. Hadn’t scuttled off. 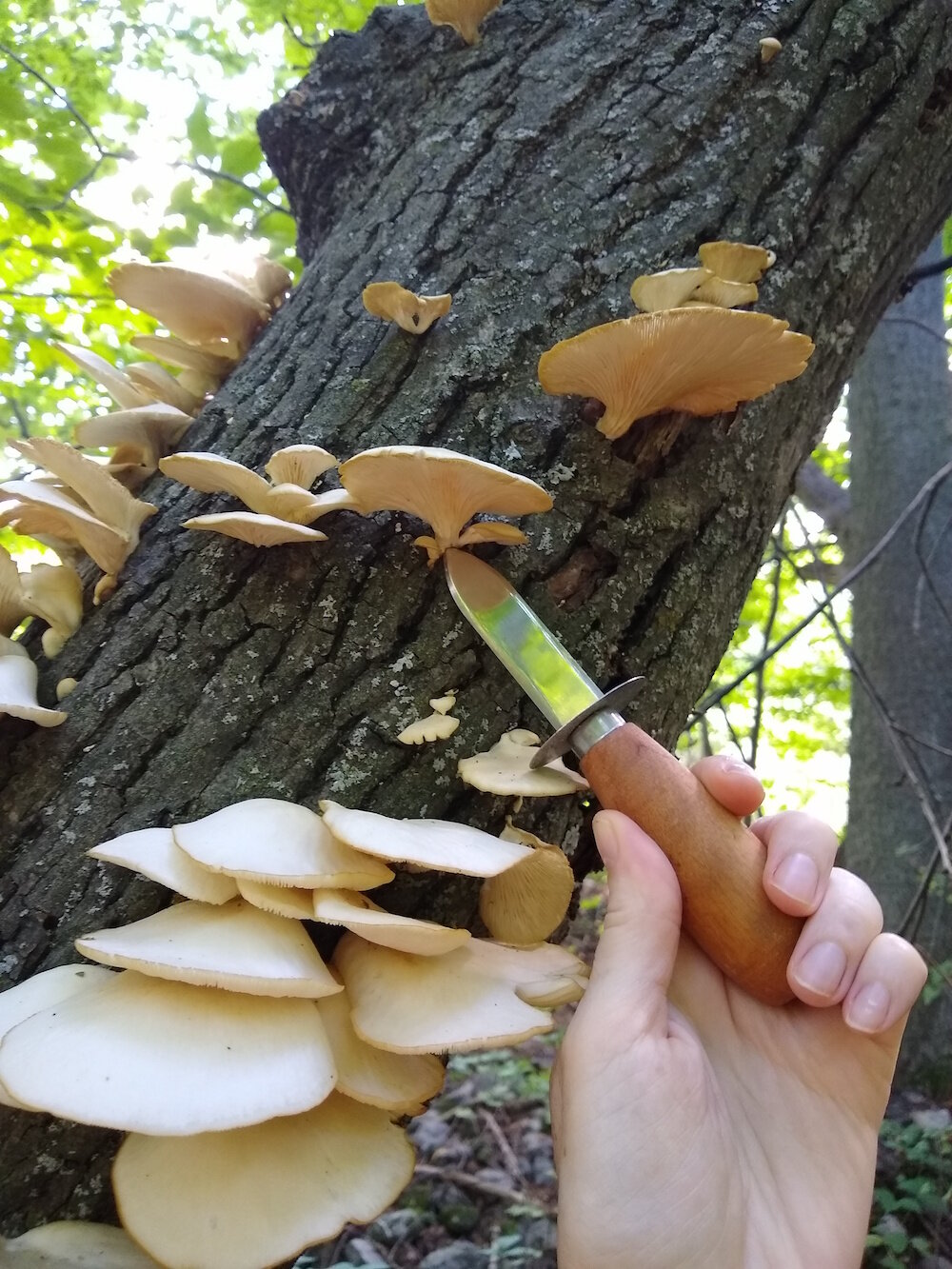 Yes that is an oyster knife. I think I’m funny. 😉 Buck-a-shuck.

Now’s the part where I make it super-duper clear that I’m not advocating you eat mushrooms that you think look like this. Even if a mushroom you find matches all the descriptions I’ve mentioned, you may still have an adverse reaction. Your body, your biome. I am an enthusiast, but an amateur. I only risk myself — and apparently Neil, who for some reason trusts me with his life. Even so, even with a confident ID of a mushroom without toxic lookalikes, we still only start by eating one. Then we wait a day to make sure we’re a-okay before eating more. Your risks of any major issues with mushrooms are way lower if you don’t pig out. We fried a couple up this morning to test, put some aside for an epic funghi pizza on Friday, and dried the rest for another day. (If we die, we’ll let you know.)

“…many people are armed with more enthusiasm than knowledge, so there is always a risk of poisoning from mistakes in identification.” ~George Barron, “Mushrooms of Ontario and Eastern Canada”

There absolutely are deadly poisonous mushrooms that grow in Ontario — I have IDd some toxic Amanitas here in our woods. Some toxic mushrooms are widespread, and they are often white and don’t “look” scary at all. Cooking mushrooms doesn’t necessarily make them safe to eat, and some of the most dangerous mushrooms will not make you sick right away. If you feel ill quickly after eating a mushroom, those aren’t even the really dangerous ones. You’ll be uncomfortable for awhile, but you’ll probably live. But mushrooms that have amatotoxins can cause serious and permanent damage to vital organs like your kidney and liver, and you’ll only start to notice the effects from those mushrooms 4 to 24 hours after you eat them. Be humble, be patient. And if you are not 100% sure, don’t eat it.

“Every mushroom is edible, but some are only edible once.”” 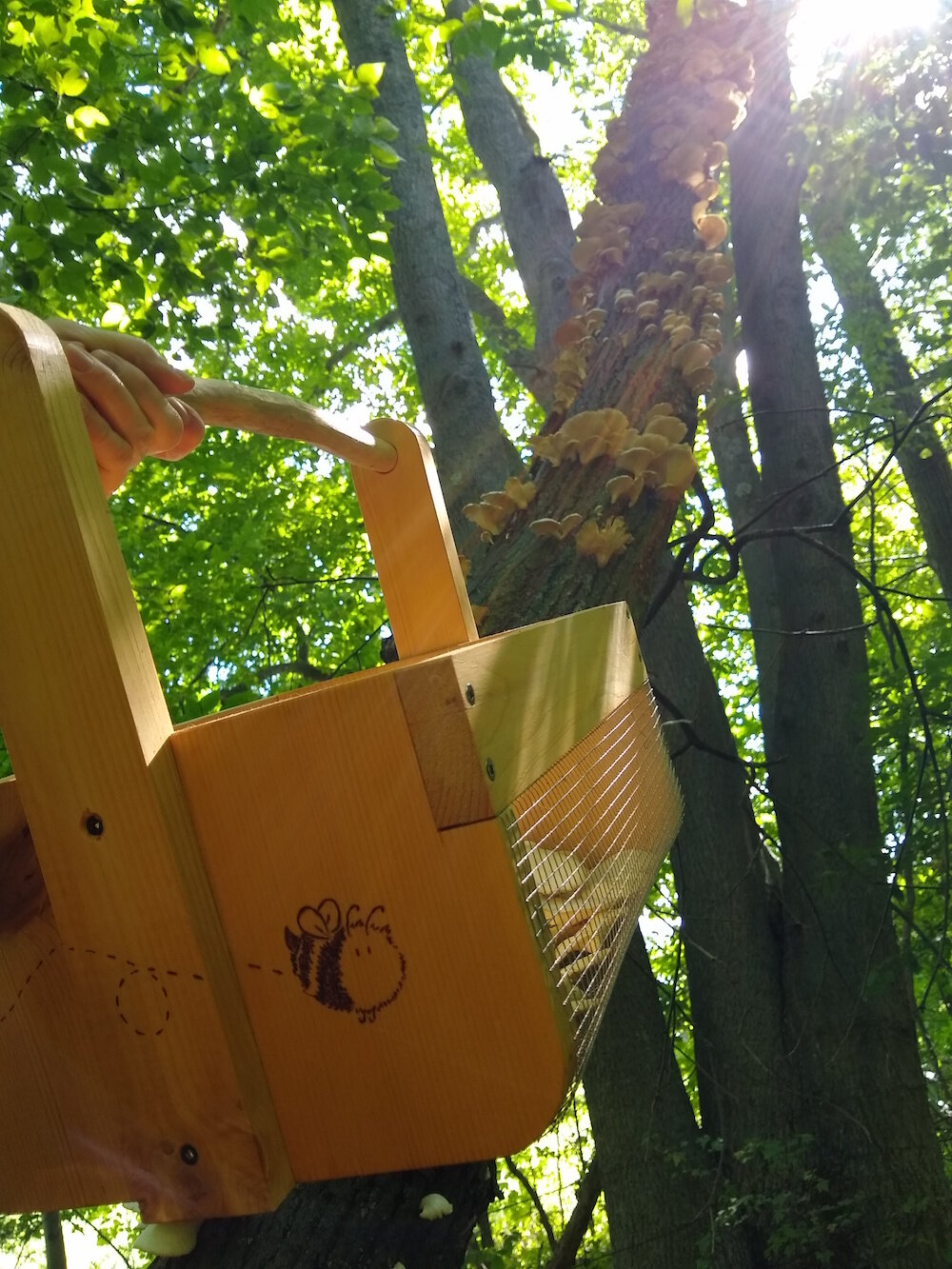 This is the tree *after* we harvested. Also this might be the most beautiful thing I have ever seen.

We harvested what felt like a lot, but was just a fraction of what was there. Life wants to be abundant, our only job is to not mess it up. The rise in interest for foraging both delights and makes me nervous. It delights me for humans to reconnect with nature, but not when we’re just taking our overconsumption to the forests. Take a few, leave many. Or take none — also a wonderful choice. It’s always okay to just enjoy with your eyes, not your belly. 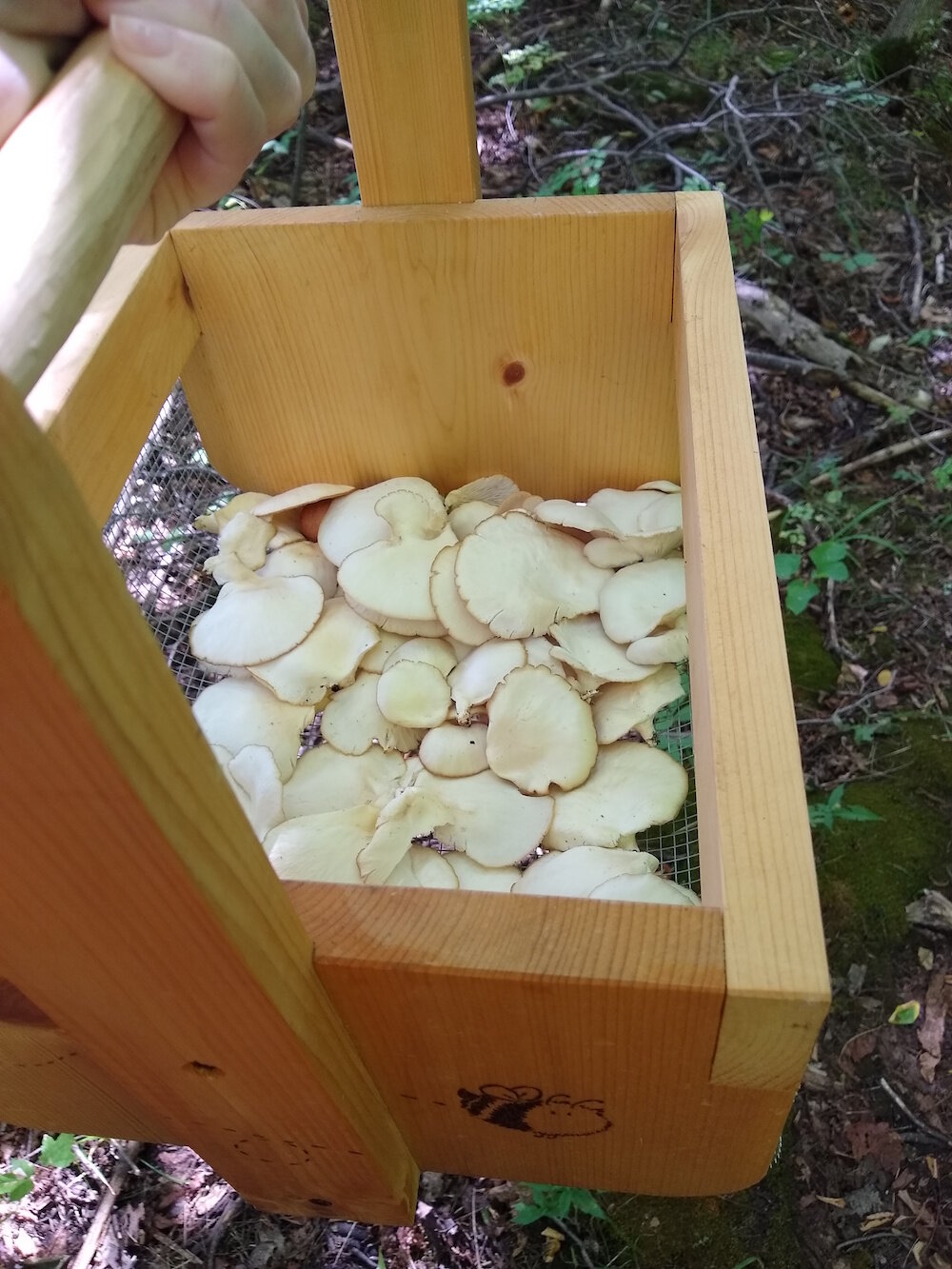 Harvesting with mesh and open baskets lets the spores disperse as you walk in the woods, helping ensure there will be more mushrooms in the future. 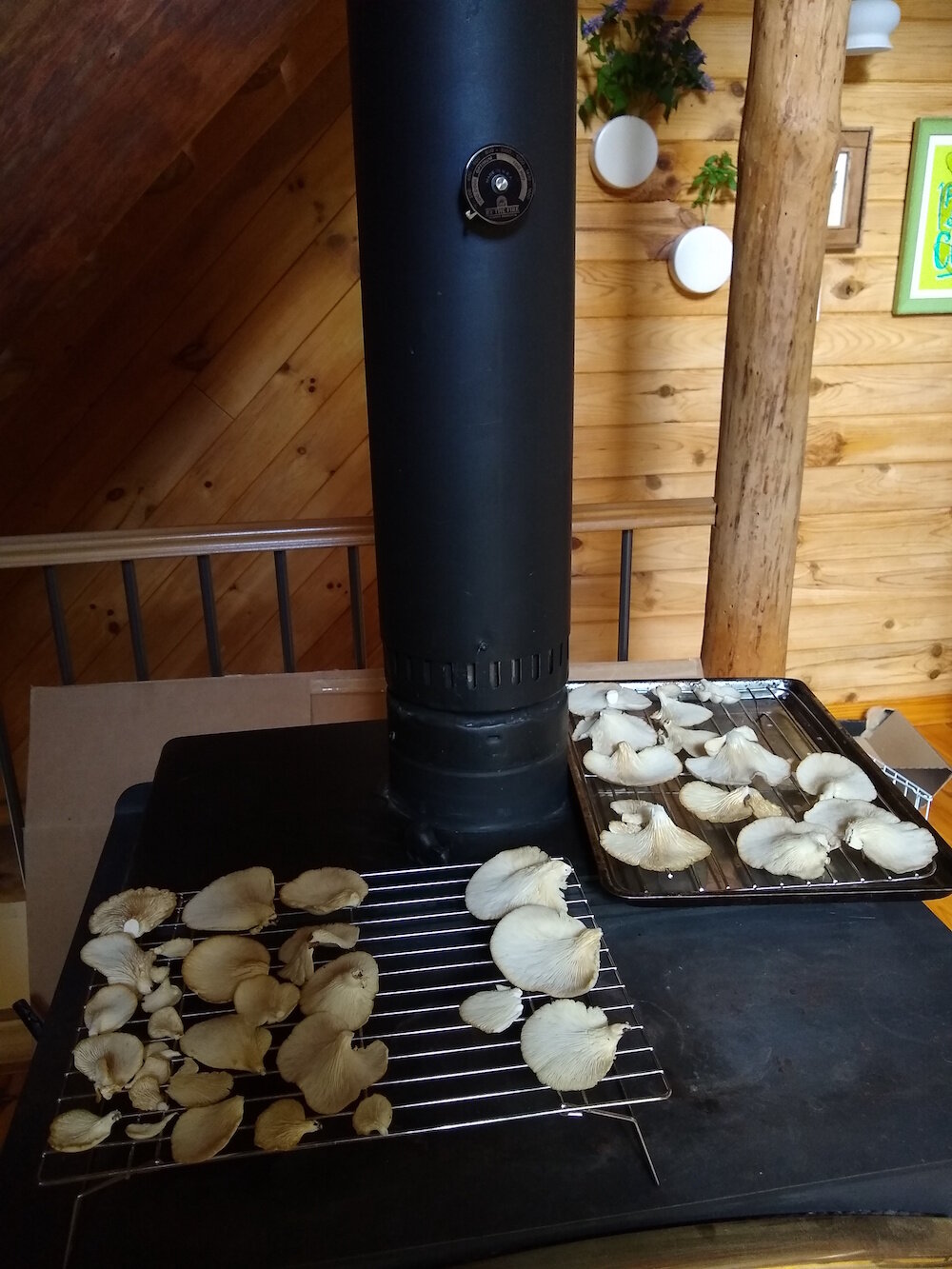 Air drying some of the mushrooms… and giving the bugs a chance to move out.

Foraging for these mushrooms felt like many bits and pieces of our lives here coming together in a fungal symphony. To know the woods well enough to know good times and locations to look for mushrooms. To ID the tree they’re growing on, and the mushrooms making that tree their home. To harvest wild foods, but not too many, and to dry and store a little wildness for later. We work really hard to learn and learn and learn, and it’s nice sometimes to taste the fruits of our labour (what I did there, you see it).